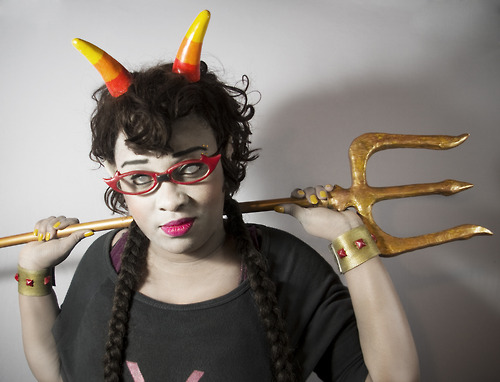 One of my first cosplays after my hiatus was to cosplay my fave fish queen – Meenah Piexes for Halloween. I loved her personality, her puns, and the fact that she was a Pisces.

Her costume was actually quite simple – a thrifted shirt and pants with the symbol handpainted on using fabric paint and a stencil.

I created the horns with air-dry clay over styrofoam forms, secured with screws to a headband hidden in the wig. The teeth prosthetics were created with heat pellets, fake nails and glue. The sea-elf ears are from Aradani Studios. And for body paint I used Graftobian Grease paint in Ghost Grey.

The wig itself was one I already owned with braid extensions attached and secured with twist ties. The glasses were purchased and modified with additional resin. And lastly, the trident was made by modifying a Halloween pitchfork with clay and resin putty.

I also made her god tier robes, but unfortunately did not take photos of that cosplay before I got rid of it.